There are countless sources to obtain information about The Beatles.


When talking about "The Get Back Sessions", there are five sources that stand out from the rest due to their reliability and size. If we want to understand what the Beatles did in January of '69, it is essential to access to these sources.


For the elaboration of this website, the information of these five sources has been used. Thanks to all those who have made their possible.


This website tries to link and sort the information of those sources.


NAGRA AND EMI TAPES
These are the main sources of "The Get Back Sessions". The tapes collect the original audio recordings of the sessions that were held at both Twickenham Film Studios and the Apple Corps in London.

In the NAGRA rolls the audio was recorded with Nagra reel to reel recorder machine, probably the Nagra IV-L. At least, there was a recorder machine for Camera A and another one for camera B.


While a large majority of the NAGRA scrolls "were out" of Apple Corps, several copies were made, and even copies of copies were made. Of all those countless replicas have been released multiple Bootlegs with more or less success and quality.


The rolls available on the Internet are NOT 100% of the recorded rolls, as some never "left" Apple Corps and others are still "lost" today


Although there are other combinations, if we want to enjoy a complete set of available rolls, we need to access the following collections:

At the Apple Corps in London, 8-track EMI tapes were also recorded with American 3M M23 Tape Machine recorders. The information on these tapes has only been made public partially.

In the early 1980s, studio engineer John Barrett was commissioned by EMI to organize and record the master tapes the company had in its archives.


John Barrett selected a lot of high-quality recordings never delivered before and noted all those recordings in a document known as "John Barrett notes".


That document can be found on the internet and includes the EMI tapes numbers of the "get Back Sessions". Today is the main information source of these tapes for all people outside the Apple Corps in London. 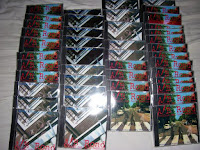 
As with the available NAGRA rolls, all the "perfomances" of January '69 are NOT in this collection.

Since 1991 Doug Sulpy has written several books about The Beatles. For our purposes, we must highlight those specifically dedicated to "The Get Back Sessions". Doug Sulpy was the first one studied in a rigorous way the "sessions" in his book "Drugs, Divorce and a Slipping Image" of 1994, where he explained for each "Perfomance" musical details, comments, anecdotes, origin, etc. from the audios that were then available.


In the 2006 edition "Complete Beatles' Audio Guide", the audios of all the Rolls that can be accessed today are shown. This book is essential since the numbering used nDDSI matches that of "A / B Road Complete Get Back Sessions" by Purple Chick.


There are two other sources of books that deserve to be mentioned, although they are not so specific in the "Get Back Sessions". On the one hand, there are Mark Lewisohn's books. Especially the book "The Beatles Recording Sessions" of 1989, where it collects all the recordings made by the Beatles. On the other hand, the books of John C. Winn provide a very important help to know the different compilations made. For the "Get Back Sessions" the most recommended book is "Lifting Latches" of 2005.


Another website to consider is Garp website in bekkoame. In this Web you can find Beatles information and some "Get Back Sessions" Map's, but ONLY updated to 1996.